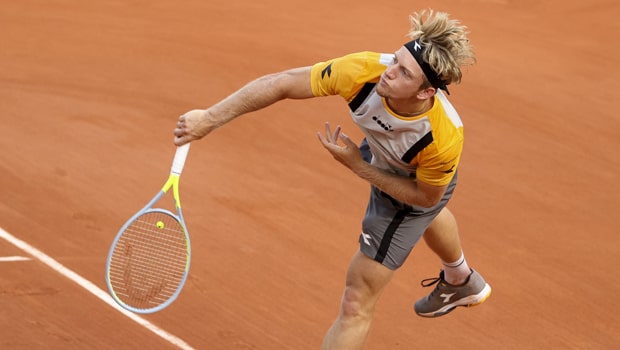 Spanish Tennis player Alejandro Davidovich Fokina feels the World No.1 Novak Djokovic is not invincible. The Spaniard will face the Serbian in the third Round of the ongoing Tokyo Olympics 2020. Djokovic is chasing the Golden slam after winning the first three majors of the season and the Spanish player feels there will be pressure on the Serbian.

Djokovic is in hot form in the recent past and he currently looks unbeatable. However, for any player, it is important to first believe that he can do it and that’s what Alejandro Davidovich Fokina is doing.

Djokovic won his second round Tokyo Olympics match against Germany’s Jan-Lennard Struff in straight sets by 6-4, 6-3. The Serbian has already matched Roger Federer and Rafael Nadal’s tally of 20 Grand slams.

The World No. 1 is hungry for more and it is not going to be easy for Alejandro Davidovich Fokina to put the brakes on the Serbian.

“He (Novak Djokovic) can be beaten too,” Davidovich Fokina told Olympics reporters. “It is clear that he is chasing the gold medal and the US Open, after the three Grand Slams he has been in, and it will not be easy to handle that pressure.”

Djokovic is chasing history and if he goes on to win Gold at Tokyo Olympics, he will take one step closer to the Golden slam. No Men’s Tennis player has ever achieved the elite landmark and Djokovic has shown that he can go all the way to win all the four majors and the Olympic Gold medal in a single season.

“Djokovic? Well, I like him. We like each other,” the Spaniard revealed. “We had seen each other on the circuit, but in his quarantine he came to his brother’s house in Marbella and we have trained together a couple of times.”

Djokovic and Fokina have faced each other once on the ATP tour, which was the Rome Masters earlier in the year. The Serbian had won that game in straight sets by 6-2, 6-1.