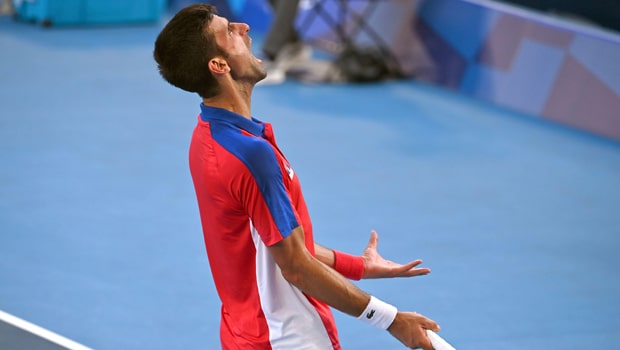 Former World no.4 Greg Rusedski feels Novak Djokovic wants to end the GOAT debate. Djokovic is on the cusp of making history as he could become the first player to win Calendar slam since Rod Laver did so in 1969 if the Serbian goes on to win the upcoming US Open.

Djokovic has already won all the three majors of the ongoing ATP 2021 season and currently has 20 slams under his bag. The World No.1 is tied with his arch-rivals Roger Federer and Rafael Nadal and he will look to leapfrog them at Flushing Meadows.

Greg Rusedski feels Djokovic could end his glorious career with 25 Grand slam titles and thus he can overtake Margaret Court’s tally of most slam titles (24). Djokovic has been playing at the top of his game and it will be a tough task for the next-generation players to put brakes on the Serbian.

“I think he will get 25 and become the all-time Slam winner on the men’s and women’s tours, with Margaret Court’s record standing at 24,” said Rusedski. “While the GOAT debate will always go on, he will have no questions to answer if he gets five and more ahead of Federer and Nadal. “It’s hard to argue against the guy who has done a Calendar Slam and has 25 Grand Slams.

“Knowing how Novak works, he will want to put distance between himself and the other two guys and he wants to end the debate. “We have been so blessed with the ‘Big Three’ at the same time in our sport, but I think Djokovic will break all the records. “The only way we can judge them is on numbers and Novak also has a winning record against the other two as well. The numbers don’t lie.”

The former British player feels the forthcoming US Open will be the most challenging for Djokovic as he will be under pressure to win Calendar slam and overtake Roger and Rafael in the tally of most majors in Men’s Tennis.

“This is the most pressured Slam he will go into in his life,” Rusedski added. “Yes there is no Federer or Nadal this time, but Medvedev is playing great, Tsitsipas and Zverev are playing great, Zverev is playing so well and this will be pressure at its highest. “You have to go all the way back to Rod Laver to find a player who did a calendar Grand Slam in the men’s game and that is all the way back in 1969.

“This is immense. This is for No 21, to put him ahead of Roger and Rafa in that race and to give him the Calendar Grand Slam. “That’s why this US Open is going to be so special and we wait to see how he deals with it.

The US Open will begin from 30th August at New York.