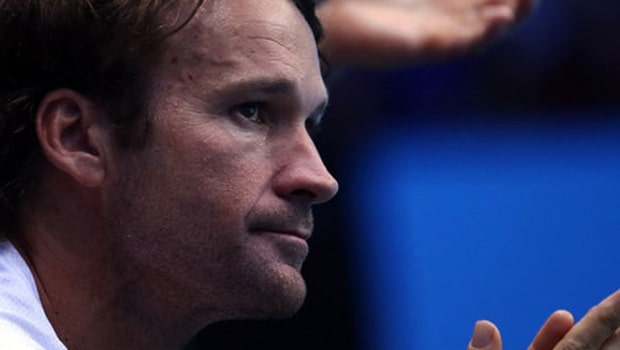 Tennis legend Rafael Nadal is one of the best players in the world. Nadal has achieved all but everything in his glorious career of more than 15 years. The Spaniard recently claimed his 13th French Open title by defeating the World No. 1 Novak Djokovic in straight sets by 6-0, 6-4, 7-5.

This was Nadal’s 20th Grand Slam title as he levelled with Roger Federer’s tally. Furthermore, Nadal won his 100th match at the Roland Garros and he has lost only two matches in his illustrious career.

Meanwhile, Rafael Nadal’s coach Carlos Moya feels Nadal can still improve his game as the perfection doesn’t exist in the sporting world. Nadal had added Moya to his coaching group back in 2016 and it was a surprising move for many. However, Moya has been instrumental in taking Nadal’s game to new heights.

Nadal has always been a hard worker and that is evident by the way he chases the ball on the court. There is no word such as ‘give-up’ in Nadal’s dictionary, which makes him one of the most successful Tennis players.

“Well I believe that perfection doesn’t exist in any sport or anyone including Rafa, you can always get better,” Moya stated in an interview.

“I’m not just talking about me, the entire team adds something from their expertise, but we have a clear goal and a vision of the Rafa we want to achieve, the tools we have, and where we want to get to,” he added.

Nadal has always wanted to improve his game and Moya heaped praise on him for having that positive attitude.

“What helps is Rafa is very open to those improvements which is weird to see in someone who’s achieved so much,” said Moya on Nadal’s hunger for getting better.

Rafael Nadal is one of the best Tennis players to have embraced the game and his hunger to improve his game separates him from the rest. Nadal has been a champion over the years and he has done a lot of hard work to achieve his success.

The southpaw will look to continue his good form and have another successful season.