Pressure is privilege, says Novak Djokovic after Round 3 win at Tokyo Olympics 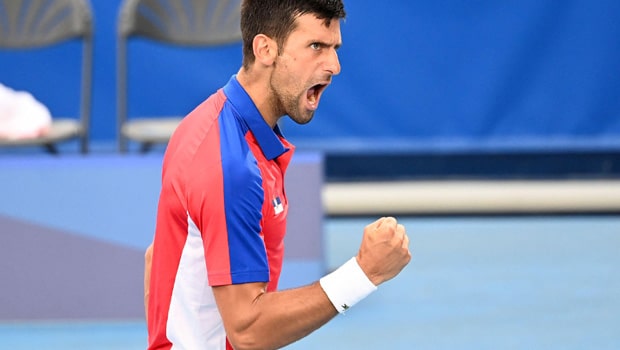 Current Wimbledon and Roland Garros champion Novak Djokovic, who is looking to win a first Olympic gold medal in Tokyo, has been clinical in his pursuit of a 2021 Golden Calendar Slam.

The world no. 1 managed to beat Alejandro Davidovich Fokina of Spain today in straight sets 6-3, 6-1 to set up a quarter-final clash with home favourite Kei Nishikori. The 34 year old Serbian is simply too good for any opponent as he managed to play in the heat of Tokyo while Russian Daniil Medvedev struggled in heat against Italian Fognini in another game.

Speaking in the post-match interview, the 2021 Wimbledon winner said that pressure is an important part of sport. “Pressure is a privilege. Without pressure there is no professional sport. If you are aiming to be at the top of the game, you better start learning how to deal with pressure and how to cope with those moments – on the court but also off the court,” said Djokovic.

The six-time Wimbledon winner also emphasised the fact how he has developed a mechanism to deal with pressure.

“I’ve developed the mechanism to deal with it in such a way that it will not impose destruction on me. I feel I have enough experience to know how to step on the court and play my best tennis. Rio (2016) was very tough loss for me. I came into Rio as also a big favourite, winning four out of the last five Grand Slams, number one in the world”, further quotes 2021 Roland Garros champion.

The nine-time Australian champion is now one step closer to a historic ‘Golden Slam’, i.e winning all major four grand slams as well as an Olympics Gold medal in one year. The feat is so coveted that no gentleman has ever managed to do it. The only Tennis player who pulled off the almost impossible task was German legend Steffi Graff, who won all four slams as well as Olympics gold in 1988.