Home » Tennis » Rafael Nadal sheds light on the GOAT debate between him, Federer and Djokovic

Rafael Nadal sheds light on the GOAT debate between him, Federer and Djokovic 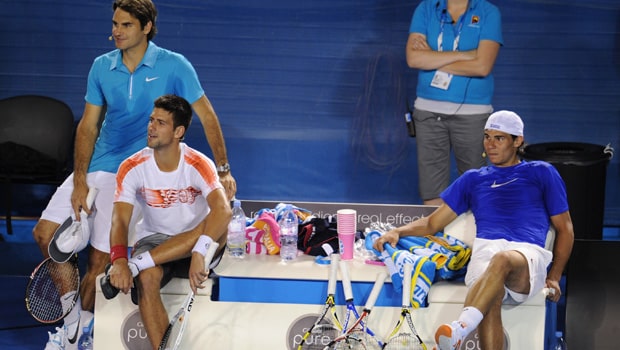 The Tennis legend Rafael Nadal registered himself in the history books on Sunday when he thrashed World no. 1 Novak Djokovic in the French Open final in straight sets by 6-0, 6-4, 7-5. Nadal was too strong for Djokovic, who could not put up a fight against the Spaniard. The Serb was trying to hurry through the points and it led to his downfall.

It was the 13th French Open title for the undisputed king of clay whereas it was his 20th Grand slam title, as he equalled Roger Federer’s tally. Both Federer and Nadal have 20 Grand Slam titles under their belt whereas Novak Djokovic has won 17 Grand slam titles.

There is no doubt that these three are the best players to have embraced the game. All of them have made the sport richer with their class and they will go down in history as the GOAT.

Nadal shed light on the GOAT debate after his French Open victory and he feels he can not be termed as the only greatest player ever.

“The numbers should be analyzed by people who have good knowledge of the history of tennis. Honestly, it doesn’t matter to me much. I’m happy with my career,” Nadal said in an interview.

Nadal added it would be interesting to note how things will pan out for the Big three in the coming years. The 34-year old admitted that he is one of the three big players of the game.

“At the moment, it’s clear that I’m one of the two. We’ll see what happens in the next few years. What Djokovic does, what Federer does when he returns, and what I keep doing,” Nadal said further. “If all goes well, we’ll have time to analyse it when our careers are over,” he added.

Rafael Nadal has always been down to earth and his statements once again prove the same. The southpaw also revealed that he hasn’t yet decided anything for the remainder of the year.