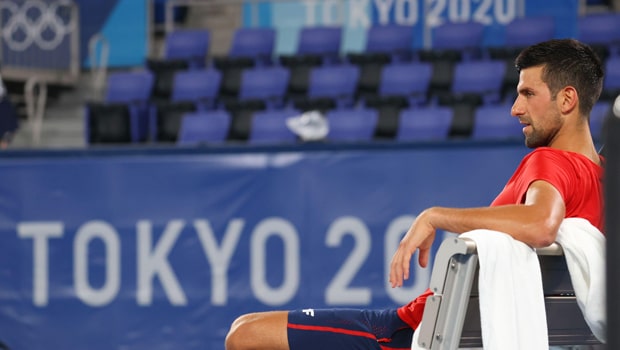 With Australian Open, French Open and Wimbledon 2021 already in the bag, Djokovic has his eye set on the big title – The Golden slam. No one in the Men’s Tennis has ever achieved this feat of winning all the four slams and Olympic gold medal in a single season.

There is no doubt that Djokovic is playing at the top of his game and he looks almost invincible the way he is playing. Djokovic is fit as a fiddle and he is in sublime form. The Serbian has matched Roger Federer and Rafael Nadal’s Grand slam tally after he won his sixth Wimbledon title, which was his 20th major.

Meanwhile, only Steffi Graff has won a Golden slam and Djokovic will look to match the legendary player by winning Gold at Tokyo and the US Open.

Djokovic would want to continue the good form and keep playing at the same level.

“I worked with her husband, Andre Agassi, a few years ago and I also had a chance to spend a little bit of time with Steffi,” the 34-year-old said in a press conference.

“I have the utmost respect and admiration for Steffi and everything she has achieved in her career and the mark that she left in our sport.

“When I was thinking about the ultimate achievement that she had, I did not think that would be, I don’t want to say achievable, but there’s a slim chance that someone could make it again. Right now it seems more and more realistic. Of course that’s one of the goals and dreams.”

The tennis event at the 2020 Tokyo Olympics begins on Saturday July 24. The Serbian faces Hugo Dellien in the opening round.