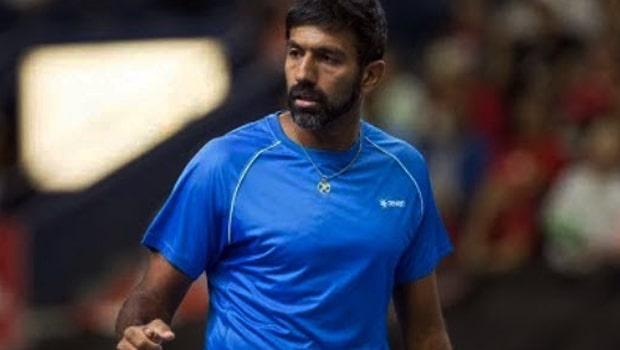 Top Indian tennis player Rohan Bopanna and his Canadian partner Denis Shapovalov have secured passage into the last eight of the Rotterdam Open.

The pair qualified for the quarterfinals with a thrilling 7-6, 6-7, 10-8  victory over Australian pair of John Peers and Michael Venus in an incredibly gripping encounter at the ATP 500 event.

It was a see-saw battle in the first two sets that entered into tie-breakers. The Australian duo gave the Indo-Canadian duo a lot of resistance often as it was difficult to subdue their efforts.

After winning the first set tiebreak, Bopanna-Shapovalov lost the second in another close tiebreak, with the match turning out to be a nerve-wracking thriller.

However, the experience of Bopanna and Shapovalov came to fore with their high level of energy, ensuring they proceeded to the last eight of the competition. Next on their plate is a clash against the fourth-seeded pair of Jean-Julien Rojer and Horia Tecau slated for today.

Meanwhile, in a single game, Nitto ATP Finals champion Stefanos Tsitsipas needed didn’t allow a shoulder problem weigh him down to earn his first win in the tournament against Hubert Hurkacz.

The shoulder problem had forced the world number six to make unforced errors in a poor tiebreak, paving the way for him to win the second set before Tsitsipas launched his comeback.

After receiving treatment, the Greek regained momentum and go 3-2 up before winning the set in 46 minutes. He later exerted his dominance in the decisive third.