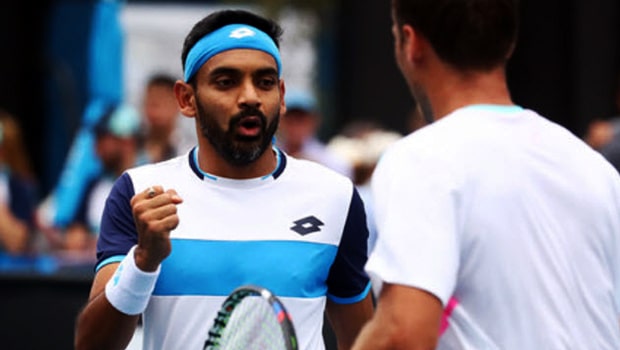 India’s number two doubles player Divij Sharan and alongside partner Artem Sitak of New Zealand have qualified for the Quarterfinals of the Delray Beach Open in Florida after defeating Andre Goransson and Ugo Humbert 5-7, 6-4, 10-7 in the last round.

Next on their plate is top-seeded Mike Bryan and Bob Bryan on Friday.

Sharan and  Sitak had lost a close first set 5-7  before mounting a comeback in the second set, where they won  75 percent of their first serve points.

The third game went into a tie-breaker, which the Indo-Kiwi pair closed out with a 10-7 win.

Speaking after the game, Divij said it was a tough match. Excited that they came back to win the game after losing the first set, he said he is looking forward to tomorrow’s quarterfinals match against the American duo.

The Bryan brothers got their last eight tickets after their opponents Nick Kyrgios, and Jordan Thompson, gave a walkover.

In another development, top Indian double tennis player, Sania Mirza and her French partner Caroline Garcia couldn’t proceed beyond the second round of the Dubai Open after losing 2-6, 4-6 against Chinese and Czech Republic fifth seeds, Saisai Zheng and Barbora Krejcikova.

The Indo-French duo had earlier advanced to the second round with a 6-4, 4-6, 10-8 win over Alla Kudryavtseva and Katarina Srebotnik on Tuesday.

Sania, who recently returned to action after pulling out of the Australian Open in January with a calf injury, couldn’t replicate the form that helped her win the Hobart Open.

It could be recalled that the top Indian player had initially withdrawn from the mixed doubles of the Australian Open, where she was set to play with Rohan Bopanna.

It was reported that she had sustained the injury but pulled through by winning the Hobart Open but couldn’t manage, forcing her to retire midway through the women’s doubles first-round match.