Sumit Nagal – the Indian who took a set off Federer 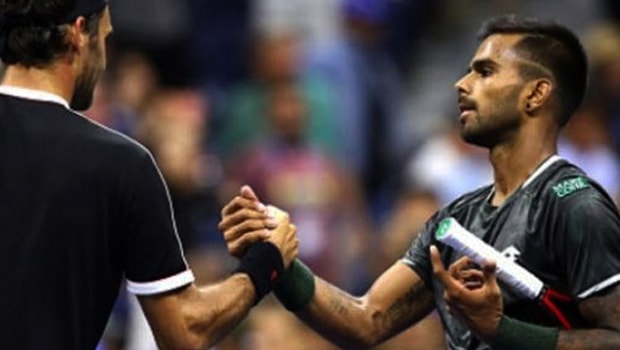 Like a million other kids in a country obsessed with cricket, Sumit Nagal also aspired to be a cricketer. However, his father, Suresh Nagal, persuaded an 8-year-old Sumit towards tennis with trips to local sports clubs with tennis facilities. 13 years later, those trips to the club put Sumit Nagal up against the Swiss maestro Roger Federer.

In 2008, Indian tennis great Mahesh Bhupati spotted 10-year-old Sumit’s talent when he was attending the ‘Apollo Mission 2018’ trials. The project aimed to produce a singles Grand Slam champion from India by 2018. Amongst thousands of aspirants, Sumit was selected to be mentored by the 12-time doubles Grand Slam champion Bhupati.

Years of training in Bengaluru, Canada, and then Germany finally bore fruit. The youngster from Jhajjar, Haryana etched his name into history books by winning the 2015 Wimbledon boys’ doubles title with his Vietnamese partner Nam Hoang Ly. He became the sixth Indian to win a junior Grand Slam title.

It was very heartening to see Sumit Nagal win at @Wimbledon. Congrats & best wishes to this young sportsman. @nagalsumit

Sumit announced his arrival on the pro circuit in 2015 by winning three ITF Futures tournaments, the entry point for every professional tennis player. He enjoyed a spectacular run at the Futures as he claimed six more titles in the next two years.

Nagal went from strength to strength as he defeated top seed Blaz Kavic and India’s then top singles player Yuki Bhambri to claim his first ATP Challenger title at the 2017 Bengaluru Open. With a string of notable performances, the youngster was slowly making his mark in the Indian tennis circuit.

Continuing his good touch from the US Open, Nagal clinched the title at the Buenos Aires Challenger in September 2019, a month after his match against Roger. He became the first Indian to win a Challenger trophy in South America.

The right-hander clearly enjoys playing on the clay court and has won eight out of his eleven titles on the muddy surface.

Sumit earned a place in his maiden Grand Slam in 2019 after surviving an intense final qualification match. The main draw of the US Open pitted him against 20-time Grand Slam winner Roger Federer. The packed Arthur Ashe Stadium, enough to make any debutant nervous, was stunned on the opening night as Nagal clinched the first set 6-4.

The Indian had the upper hand in rallies and also gained from Federer’s 19 unforced errors. He became the first Indian to claim a set against the 5-time US Open winner. Sumit, however, was brought down in the next three sets as Federer got back into the groove.

The long road ahead

Over the last three decades, India has not been able to match the world’s might in the singles category. The last time an Indian male broke into the top 20 of the singles world rankings was in 1980. However, this dearth of Indians at the highest level might come to an end with youngsters like Sumit steadily climbing up the rankings.

The 22-year-old currently sits at 127, five places above fellow countryman Prajnesh Gunneswaran, in the ATP rankings which are now frozen until July due to the COVID-19 pandemic.

The highest-ranked Indian has been doing the hard yards at the Nensel Tennis Academy in Germany, his current base. And, if the Jhajjar lad continues to strive for excellence, it won’t be long before that set against Federer will be topped by bigger trophies and accolades.