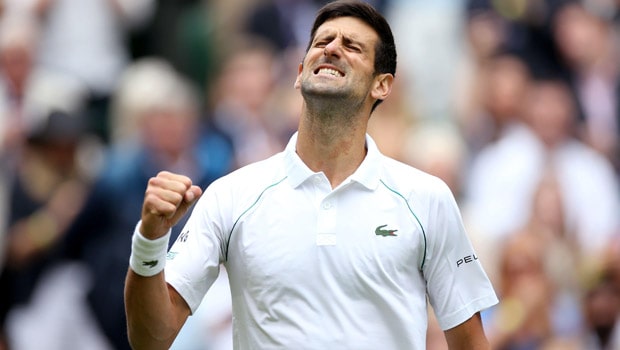 The World No. 1 Novak Djokovic continued his sublime form as he cruised to the third round of ongoing Wimbledon 2021 on Wednesday. Djokovic defeated South Africa’s Kevin Anderson in straight sets by 6-,3 6-3, 6-3. At a height of 2.03 metres, Anderson has a big serve and makes great use of his height.

However, the Serbian didn’t have a lot of difficulties in seeing off the Proteas player. Djokovic understands that Anderson could have been a dangerous opponent for him and he is pleased to go past him without breaking a sweat. Meanwhile, Anderson is well known for his epic 2018 Wimbledon semi final clash against John Isner.

“[I’m] very pleased,” Djokovic said in his on-court interview. “Kevin [Anderson] is a terrific player, very dangerous on fast courts, grass courts. “Today, only one break each set was enough. I thought I held my serve really comfortably, I was using the angles really well from the back of the court.”

Djokovic was at his absolute best as he didn’t have any break points to save and committed only six unforced errors throughout the match. Only one break in each set was enough for Djokovic to seal the deal against Kevin Anderson.

Djokovic admitted that he was well prepared for the big serve of Kevin Anderson and played better than what he himself expected.

“I knew that Kevin was going to serve big, I’m not gonna have too many chances to break his serve. So, I might as well try to play solid but not too risky. “I did much better than I thought I would do.”

Novak Djokovic, who is a five-time Wimbledon winner, will face the winner of the second round match between Andreas Seppi and Denis Kudla in the third round. Djokovic is chasing his 20th Grand slam title.