Wimbledon 2021: Records do inspire me to play my best Tennis, says Novak Djokovic 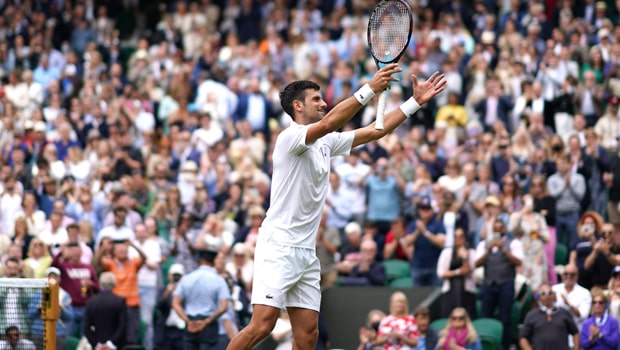 The World No.1 Novak Djokovic has admitted that record does inspire him to play his best Tennis. Djokovic has been in sublime form and he tries to give his best whenever he takes the court. The Serbian is known to give more than 100% and the results are a testimony to his success.

Djokovic is chasing his 20th Grand slam title in the ongoing Wimbledon 2021 and if he goes all the way in the iconic tournament, he will level with Rafael Nadal and Roger Federer’s tally of 20 slams.

Earlier in March 2021, Djokovic went on to break Roger Federer’s massive record of spending most weeks (310) at the number one position. After bagging that record, Djokovic had stated that his focus will now be more on winning Grand slam titles.

Djokovic has already bagged two majors in the ongoing season and he is looking all set to clinch his third and inch closer to Grand Golden slam. Meanwhile, Djokovic became the first player to win at least 75 matches in all the four slams when he won his Round 4 match. Furthermore, Djokovic will play his 12th Wimbledon quarterfinal.

“You always enjoy hearing those stats. It’s a privilege to break records in the sport that I truly love, I’m devoted to the sport as much as, I think, anybody on the tour,” the Serbian said.

“So, I try to do my best. Of course they [records] are a motivating factor, I am aware that there are many records on the line. I don’t know, I’m not aware of all of them. But of course, they do inspire me to play my best tennis.”

Djokovic is only three wins away from creating history and he will look to go all the way to win his sixth Wimbledon title. The Serbian will face Hungary’s Marton Fucsovics in the quarterfinals, who stunned Russia’s Andrey Rublev in the Round of 16.