Home » Football » Euro Cup News » Euro 2020 | If you get the selection wrong you’re dead: Gareth Southgate on his starting XI against Germany

Euro 2020 | If you get the selection wrong you’re dead: Gareth Southgate on his starting XI against Germany 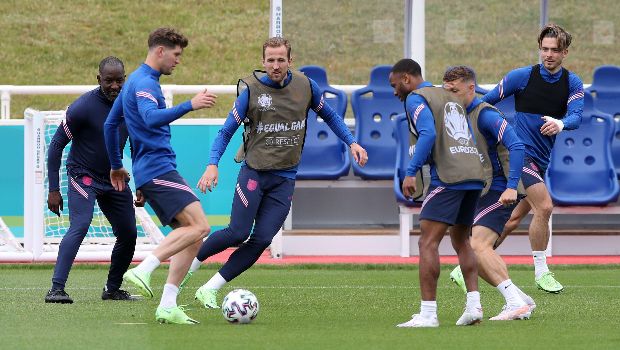 England defeated Germany in a historic encounter yesterday at the Wembley Stadium in London in their Euro 2020 Round of 16 clash.

Goals from Raheem Sterling and Harry Kane helped England beat Germany beat in the knockout rounds of a major international competition for the first time since the 1966 World Cup final.

England manager Gareth Southgate made quiet a few changes to his lineup against Die Manschafft with the most notable being the deployment of a double-pivot and three men at the back. The tactical tweaks gave England the upper hand in the match, especially in the second half.

In the psot-match press conference, Southgate admitted that had he gotten the starting lineup wrong, he’d be as good as dead.

“You know, you change the shape, you pick certain personnel in place of others and if it goes wrong, you are dead,” Goal.com quoted Southgate as a saying. “We had to go about it in the way we believed.

We wanted aggressive pressure all over the field and we felt that to match them up was the right way of doing that.”
The Three Lions started with Arsenal youngster Bukayo Saka on the left. Saka caused a lot of problems with his pace and technical ability in the first half and saw plenty of the ball.

“We felt that speed in behind Harry would cause them problems. I thought that Bukayo [Saka] and Raheem really created that jeopardy behind their backline right from the start,” said Southgate.

The England manager also departed from his faith on the four-man defence which he used during the group stages and instead, switched to a back-three of Kyle Walker, Harry Kane, and John Stones. He also used Luke Shaw and Kieran Trippier as wing-backs pushing high up the pitch and create an overload on the flanks.

“We also defended brilliantly and our goalkeeper was immense. It was a tremendous performance. We played extremely well. I think we deserved the win but I have had to say to them straight away. Look, I am the party pooper, because if we do not capitalise on Saturday now tshen it does not count for anything,” Southgate concluded.