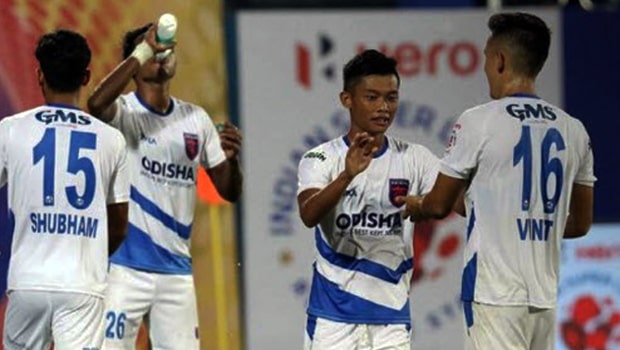 With the Indian Super League entering the playoff stages of the tournament, the league has showcased the evolution of some capable young Indian stars with bright futures ahead.

With FC Goa, ATK FC, Bengaluru FC and Chennaiyin FC vying for the ISL trophy, here is a list of some of the stars yet to be capped by the national team and will be looking to live up to their potential in the near and far future:

The young Mizo winger has been a regular set up in the Indian Super League since 2016, although he is yet to make his debut in the international set up in any of the youth or senior levels. After a dismal 2018-19 season with Jamshedpur FC, the speedy winger has had his best season yet since joining newcomers Odisha FC.

Appearing in all but one of the Odisha’s games this season, he has two goals and five assists, and was named Hero of the Match on two different occasions. At the age of 22, the young winger has already made 46 appearances in the ISL and a call up for the international team is not far for the pacy wide man.

The 19-year-old midfielder broke into the Highlanders’ first team amidst a crippling injury crisis and made a place for himself in an otherwise subpar season for the Guwahati-based club. A tenacious midfielder, Lalengmawia made history in 2017 after becoming the only player from his state to make to India’s squad for the FIFA U-17 World Cup.

Fondly known as Apui, Lalengmawia is a natural central midfielder, who is also capable of playing a more attacking role or as a left-winger. Having joined from Indian Arrows this season, he had a passing accuracy of 80.45%, averaging 48 passes per match, although he is yet to score or assist a goal in the ISL.

Another young star from Odisha, Shubham narrowly missed out on making it to the final Indian squad for the FIFA U-17 World cup but has flourished since. Making his ISL debut with Delhi Dynamos last season, Sarangi has played almost double the games he played last season, clocking 1409 minutes for his club.

After a strong start to the season, the young fullback was key to Odisha’s fight for the semis and was pipped to be included in Igor Stimac’s squad for the FIFA World Cup qualifiers. Making 97 clearances, Sarangi averaged 36 passes per game and made 81 successful tackles.

Starting the season as a right-back, Rathi has established himself in the back alongside Pritam Kotal and Agustin Iniguez. After the departure of the Spaniard, the 18-year-old academy graduate has stepped up to the occasion, displacing veteran defender Anas Edathodika from the side.

With a passing accuracy of 70.9%, the youngster has made 82 clearance in 11 matches, and is a solid presence at the back for ATK, allowing his more experienced teammates to make forward forays. His versatility has seen him play as a right-back and a right wingback as well. Having played for the U-19 and U-20 youth levels, Rathi will look to take advantage of Sandesh Jhingan’s injury, with his playoff performances for ATK key for his future with the national team.