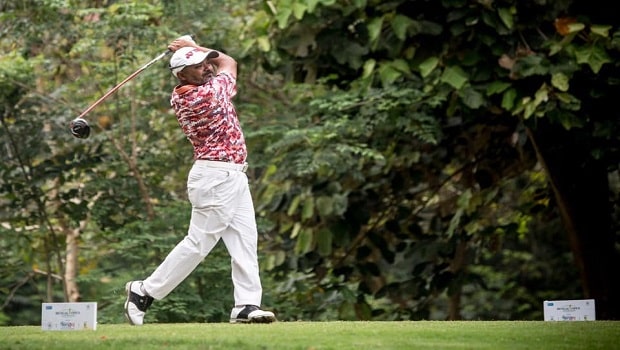 The young golfer moved into the top spot with a two-shot lead at 11-under-205 in round three in the tournament being played at the Karnataka Golf Association (KGA) course.

Kochhar was one shot off the lead in tied fourth at the halfway stage before producing a steady three-under-69 on Thursday to emerge as the prime contender for the title at the Rs. 40 lakh event.

In a tournament which is the penultimate leg of the 2019 TATA Steel PGTI season, Rahil
Gangjee (71) and Faridabad-based Abhinav Lohan (70) are also in tied second place at nine-under-207.

Karandeep (67-69-69), who is still looking for his first title after turning professional started on a good note with long birdie conversions on the second and fifth hole despite being in trouble with his tee shots on both holes.

Karandeep, however, found the water and drop his first bogey of the day due to an error in club selection.

Karandeep, who was the youngest player to win on the PGTI at the age 17 years and five months later landed it close to pick up two more birdies on the eighth and 12th.

However, those two birdies were negated by Karandeep’s two following birdies on the 13th and 15th. As a result of this, the former came as a result of a three-putt.

He, however, managed to finish the round on a high with two long birdie putts on the 16th and 18th on the windiest day of the tournament.

Currently occupying the number 7 spot in the PGTI Rankings, he has been in the four top-10s this season.

Speaking after the game, he said it was great to end his round with two birdies for the second straight day.

While nothing that he made birdies on the closing 17th and 18th in round two, he said it was the 16th and 18th in the third, which he said would help him carry forward the momentum into the next round.

Karandeep also pointed out that he has been putting really well, adding that feel of the green speed during the week has also helped him.