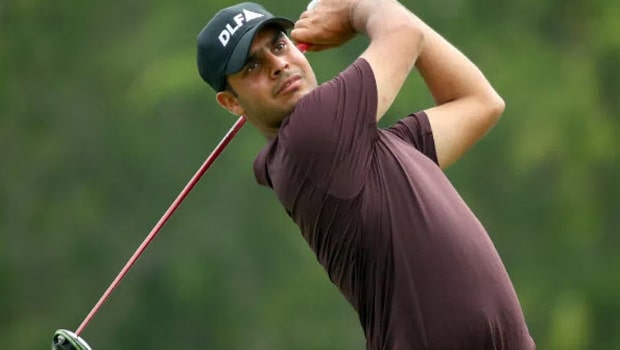 After valiant attempts, Indian golfer, Shubhankar Sharma, could not make the cut at the Hero Open.

The young golfer missed out in his first start since the return of competitive golf on the European Tour after the coronavirus-enforced break.

The 24-year-old had in the first round shot 73, which put him way off the cut line with three bogeys on the trot around the turn. He also dropped shots on ninth, 10th, and 11th holes, which left him four-over for the tournament.

With the cut likely at two-under, Sharma later produced four birdies. Three of the four were produced in a row from 12th to 14th, while the other came on 17th. The golfer, however, couldn’t get any more and miss out.

After registering a superb nine-under 63, Sam Horsfield became a contender for the title. He also made a hole-out eagle, which took him to the top of the leaderboard alongside first-round leader Sebastian Garcia Rodriguez (69).

The Spaniard had opened the tournament with a course record 62, and he showed no signs of nerves. He later picked up five birdies, including one at the par-three 18th hole as he moved to a three-under second round 69.

Speaking after the game, Sharma said he gave his all and played the last seven holes very well. While noting that it was probably a case too much to cover up, Sharma said his real game showed up on the backstretch but had too much gap to make up.

On his second shot, a 6-Iron that was followed by an eagle, he added that after three birdies, he did think of an eagle on par-5 17th, but that won’t be.

Sharma, who also stated that the weather was windy and not calm, unlike earlier in the day, said the two holes, tenth, and 11th, cost him his place as he dropped five shots over two days on the two holes.

He further explained that he had a three-putt on one and another in the second round, which he hit to the left. After failing to make an up-and-down, it became challenging on the 18th, where he recorded a challenging par-3 and found the green, but it was almost 50 feet.

Speaking on the first week of the competition in the UK after the coronavirus break, the 24-year-old said the game seemed okay, but will be fine with some fine-tuning.