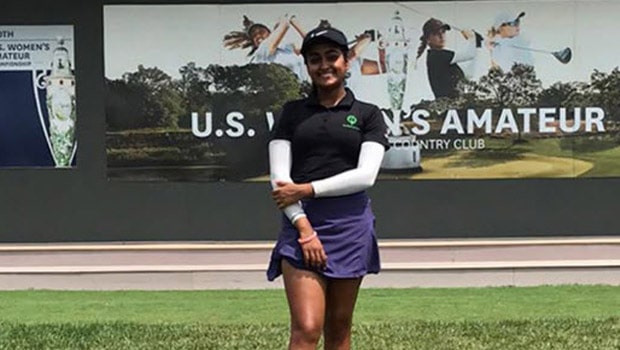 16-year-old Indian golfer, Anika Varma, has missed out on qualifying for the match play of the US Women’s Amateur Championship.

The young golfer, who recently moved to the US to continue her career, fell short by just one shot despite bouncing back strongly in the last six holes of her second round.

The second round that was delayed to Wednesday due to the hurricane was played in extremely tough conditions. The tightness of the course sees just seven players recording under par after 36 holes.

Anika, who seemed to have settled down in Sacramento, is the first Indian to play the US Women’s Amateur Championship.

After starting from the 10th on the Woodmont Country Club’s backstretch, the teenager had a rough first nine, giving away two bogeys and two doubles.

Although she was able to get three birdies on fourth, fifth, and eighth holes against one on seventh in the last six holes, this cost Anika heavily.

She would have made the cut for the play-off that would have determined the final spots in match play with a birdie on ninth, which was her closing hole, but she finished at four-over 76 for a total of seven-over 151.

The playoff spot was won by sixteen players, who recorded six-over while Anika got stranded at seven-over.

Anika would have learned a lot on her debut in the tournament despite not qualifying for the next stage. One of them is playing in very tough and demanding conditions.

The other player of India origin Megha Ganne (71-76) made it to the last 64 after emerging T-26. Kajal Mistry and Gurleen Kaur qualified as well through playoff after registering 81-69 and 78-72, respectively.

Rachel Heck topped the stroke play section with rounds of 69-71 after recording a 36-hole total of 4-under 140.